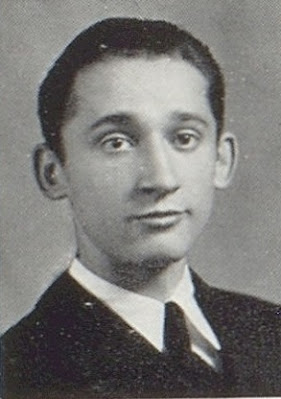 CPL Joseph Alex Vagasi was born 22 Jun 1923 in Coraopolis, Pennsylvania. He was the only child of Romania immigrants, Joseph and Julianna (Simo) Vagasi. It might have been because he was from Vagas, Romania that the elder Joseph changed his name from Wagonish to Vagasi soon after he immigrated in 1907. The elder Joseph worked for Continental Roll Steel Foundry and had been successful enough to purchase a home at 610 Sixth Street in Coraopolis which was valued at $6000 in 1930. The house is still standing today.The younger Joseph attended Coraopolis High School where he participated in the Boy Scouts, ran track, was a member of the glee club and a member of the National Honor Society. He then attended Pennsylvania State College in State College, Pennsylvania.

Joseph enlisted 26 May 1943 and began his training at Camp Wheeler, Georgia. It is unknown when he was sent to England but this was probably fairly early in 1944. CPL Vagasi was transferred from the replacement depot to L Company 116th Infantry on 22 Jun 1944. He was serving as a squad leader when he was wounded in the effort to liberate Saint-Lo, dying of his wound(s) on 12 Jul 1944.

CPL Vagasi was repatriated in 1948 and re-interred in the Gettysburg National Cemetery in Gettysburg, Pennsylvania.