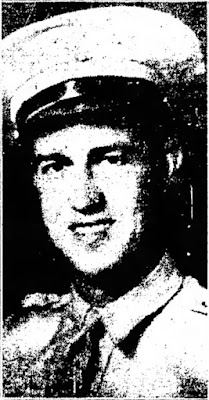 PFC George Leo Overlock Jr. was born 14 Jun 1915 in Stephentown, New York. He was the youngest of the 3 children (2 boys and 1 girl) born to George Leo and Alice Louise (Roach) Overlock. His father supported the family as a wood turner in a mill in Hancock, Massachusetts and later as a farmer in Stephentown, New York where his mother had been born. His father died before 1940. George continued to live with and support his mother working as farm labor with a reported 1939 income of $180. However, Alice still owned the family home valued at $3000. George later moved to Pittsfield, Massachusetts and went to work for General Electric in their distributin transformer winding department. He also married Miss Alfreda H. Reynolds of Stephenstown.

George was drafted in February 1943 and attended training at Camp McNair, Mississippi and Fort Jackson, South Carolina. Alfreda was able to visit him at Fort Jackson in April 1944 before he was sent overseas. PFC Overlock was transferred from the replacement depot to C Company 116th Infantry on 5 Jul 1944. He was killed in action on 6 Jul 1944 near Saint-Lo, France.

PFC Overlock was repatriated in 1949 and re-interred in the Immaculate Conception Cemetery in New Lebanon Center, New York.

George and Alfreda had no children.
Posted by Hobie at 8:38 AM