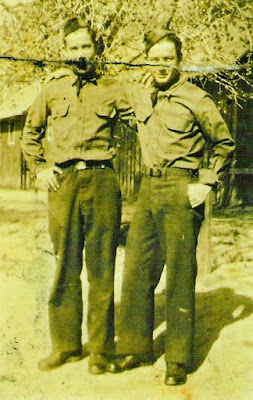 PFC Leonard Ray Mahon was born 23 Jul 1924 in Port Arthur, Texas. He was the 4th of 6 children born to James Robert and Willie Pearl (Westmoreland) Mahon. His father worked as a truck driver and as a laborer in construction supporting his family on only $260 income for 1939.

Leonard volunteered for the Army and enlisted on 8 Sep 1942 in Lubbock, Texas. After attending his military training, he was sent overseas to the European theater and on 25 Jun 1944 was transferred from the replacement depot to L Company 116th Infantry. PFC Mahon was killed in action on 12 Jul 1944.

Great grandfather William Hollis Cypert was a SGT in D Company and 2LT in K Company of 1st Arkansas Infantry Battalion (USA) during the Civil War.

One of the 2 men in the photo is Leonard. We don't know which man and we don't know the identity of the other person.
Posted by Hobie at 5:45 PM