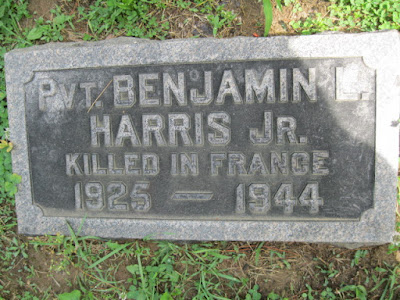 PVT Benjamin Lakin Harris Jr. was born in 1925 in Cincinnati, Ohio the only child of Benjamin Lakin and Lucille Theresa (Stockman) Harris. His father, a Marine Corps veteran of WWI, worked as a bookkeeper, private secretary, and stenographer.

PVT Harris was repatriated and is buried in the Greendale Cemetery in Greendale, Indiana.  His father and mother died in 1971 and 1972 respectively.
Posted by Hobie at 9:04 AM