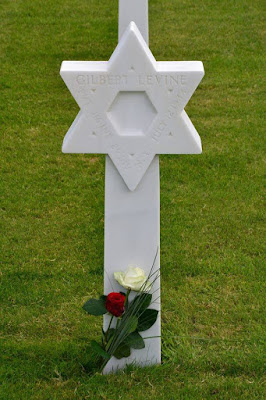 PVT Gilbert Levine was born in 1924 in the Bronx, New York the second son of Edward and Sarah (Miller) Levine. His father was a house painter.

Gilbert was working as a sales clerk when he was drafted in May 1943.  Sent to Europe after basic training he was transferred from the replacement depot to F Company 116th Infantry on 12 Jul 1944 and killed in action that same day.

PVT Levine is buried in the Normandy American Cemetery.
Posted by Hobie at 6:00 AM