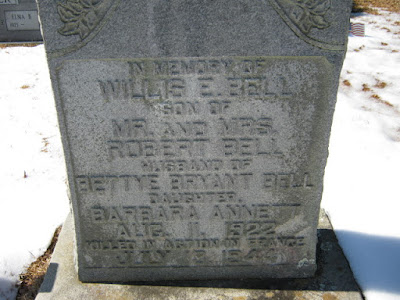 PVT Willis E. Bell was born 11 Aug 1922 to Robert and Mabel (Davis) Bell of Apison, Tennessee. His father worked as a salesman of monuments.  Aft 1940 he married Bettye Gladys Bryant and they had a daughter, Barbara Annette Bell.

Willis was drafted in November 1942.  Eventually sent overseas he was assigned to Headquarters 116th Infantry.  He came ashore on D-Day with COL Canham.  PVT Bell was killed in action on 13 Jul 1944.


PVT Bell is buried in Plowman Cemetery in Apison, Tennessee.  Gladys remarried.  Their daughter married and had 3 children.
Posted by Hobie at 7:44 AM