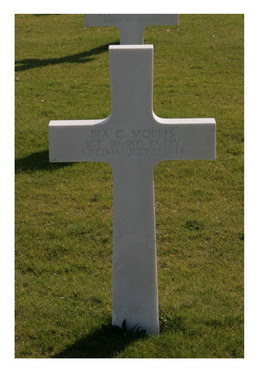 SGT Ira Claude Morris was born 13 Aug 1916 in Rockingham County, Virginia. He was the 3rd of 6 children and only son born to Luther Isaac and Iota Belle (Rodeffer) Morris. The family moved to Fairfax county where his father found work as a motorman, laborer and later as a farmer. Ira managed to complete high school. In 1940, Ira was working with his father. Shortly after that he found work as a motorman on a streetcar in Richmond, Virginia.

He was working in Richmond when he was drafted in May 1941. Like many draftees of that period, Ira was sent to a regional training center at Fort Meade, Maryland where he was assigned to E Company 116th Infantry. He trained with that unit at Fort Meade and Camp Blanding, Florida before being sent to England with E Company in September 1942. He trained there for the amphibious landing that was to be part of the invasion of occupied France. That landing took place on 6 Jun 1944. PFC Morris continued to fight with the unit as a rifleman until promoted to SGT on 25 Jun 1944. SGT Morris was killed in action on 12 Jul 1944 near Saint Lo, France.

SGT Morris was ultimately buried in the Ardennes American Cemetery.