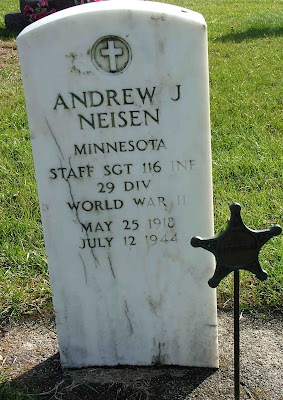 SSG Andrew Joseph Neisen was born 25 May 1918 in Belle Plaine, Minnesota. He was the first born of 7 children born to Peter and Anna (Bartusek) Neisen. The family farmed and on the 1940 census that was the occupation reported for Andrew.

Andrew was drafted in June 1941. He was probably assigned to E Company 116th Infantry prior to September 1942. He would have trained with the unit for the amphibious assault that took place on 6 Jun 1944 (D-Day). SGT Neisen fought with his unit from that day and was promoted to SSG on 25 Jun 1944. SSG Neisen was killed in action in the vicinity of Saint-Lo on 12 Jul 1944.

SSG Neisen was repatriated in 1949 and re-interred in Saint Johns Cemetery in Union Hill, Minnesota.