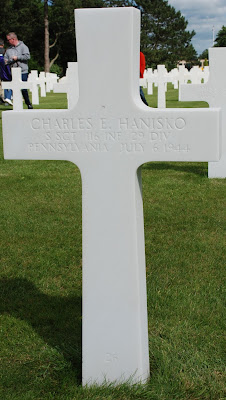 SSG Charles E. Hanisko was born in 1919 in Excelsior, Pennsylvania to John Stephen and Mable Magdalene (Zartman) Hanisko.  His father had worked as a coal miner and was a laborer at Shamokin Iron and Metal Company in 1940.

Charles was apparently working as a warehouseman when drafted in February 1942.  After training he was sent to England and assigned to C Company 116th Infantry.  He trained for the amphibious assault with that unit and took part in the D-Day assault.  Charles was already a SSG at that time and when he was wounded by shrapnel in the left elbow on 17 Jun 1944 but remained on duty.  SSG Hanisko was killed in action on 6 Jul 1944.  He was posthumously awarded the Bronze Star.

SSG Hanisko is buried in the Normandy American Cemetery.
Posted by Hobie at 4:47 PM