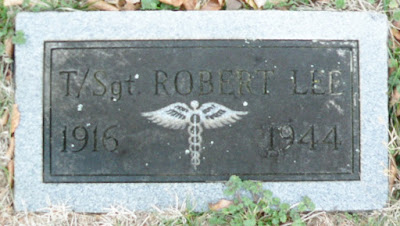 T3 Robert Lee Adkins was born in Kanawha County, West Virginia on 20 Apr 1916 to Charles Edward and Barbara Alice (Emswiler) Adkins.  His father worked variously as a driver and plumber and the family moved quite a bit.  In 1940, Robert was a wholesale candy salesman.  On 1 May 1937 he married Mary Kathleen Rodeffer.

Robert was a PVT in the Medical Detachment 116th Infantry when that unit was federalized in February 1941.  He was a member of the unit on D-Day and served without serious incident until he was killed in action on 12 Jul 1944.

T3 Adkins was repatriated and is buried in Woodbine Cemetery in Harrisonburg, Virginia.

Mary remarried had 2 sons and lived until 1996. She and Robert apparently had no children.

Email ThisBlogThis!Share to TwitterShare to FacebookShare to Pinterest
Labels: MedicalDet