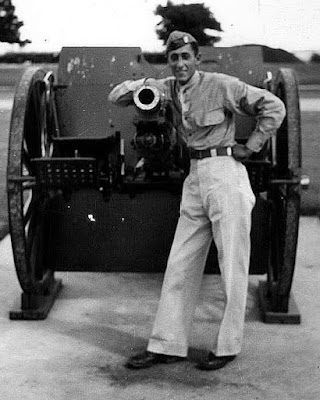 TSGT Carmen James Sorrentino was born in Saint Clair, Pennsylvania in  May 1919. He was the 3rd fo the 4 children, 3 boys, born to Pasquale and Anna (Cimato) Sorrentino. Both parents were natives of Regio Calabria, Italy. His father supported the family by working as a laborer, gardener and for a plumbing supply company. The family lived in a number of places, among these were Lawrence, New York but Carmen graduated from high school. Younger brother, Joseph, died at the age of 21 in 1932. By 1940 the family was renting a home at 24 Norton Street in Hempstead, New York. Carmen was also working, as retail grocery clerk. His father reported a 1939 income of $420 and Carmen reported $212 for the same period.

Carmen was drafted in February 1941. We do not know where or what training he received but he was eventually assigned to Headquarters 1st Battlion 116th Infantry were he served as Communications Chief (MOS 542) before and after the amphibious assault at Omaha Beach. TSGT Sorrentino continued to serve with his unit until he was killed in action on Martinville Ridge near Saint-Lo, France 12 Jul 1944 by artillery fire. TSGT Sorrentino was awarded the Bronze Star.

TSGT Sorrentino was ultimately interred in the Normandy American Cemetery.

His only surviving brother, Anthony, also served in the U.S. Army during WW2.
Posted by Hobie at 7:14 AM