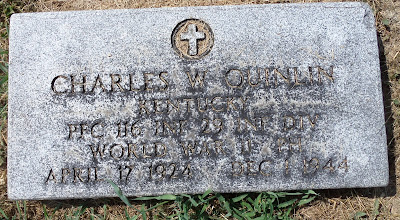 PFC Charles William Quinlin was born 17 Apr 1944 in Augusta, Kentucky. He was the youngest of the 4 children, all sons, born to Stanley William and Emma (Jett) Quinlin. His father worked in a garage in Augusta and later in bridge maintenance. Charles was working for L. V. Marks in 1942 and then moved to Cincinnati, Ohio to work in a shoe and boot factory.

Charles was drafted in October 1943. After completing his basic military training PVT Quinlin was sent to the European theater. On 9 Aug 1944 he was transferred from the replacement depot to D Company 116th Infantry as a machinegunner. On 9 Oct 1944 he was promoted to PFC. PFC Quinlin fought with the unit until 1 Dec 1944 when he was killed in action.

PFC Quinlin was repatriated in 1949 and re-interred in the Mount Zion Cemetery in Brooksville, Kentucky.
Posted by Hobie at 3:43 AM