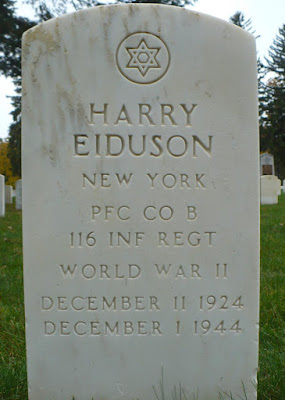 PFC Harry Eiduson was born 11 Dec 1924 in Buffalo, New York to Joseph and Ida (Schulman) Eiduson. Joseph worked as both a dealer in coal and as a shoemaker. He had immigrated from Lithuania.  He made a fairly good living to support the family of 5, about $1800 in 1939.  They were prosperous enough that the family was able to purchase the home at 100 Cherry Street in Buffalo which was valued at $8000 in 1930. Ida was also an immigrant, having come from Poland. Not knowing which towns they were from they might not have lived that far apart before moving to the U.S.  Harry is not shown as employed on the 1940 census.

When Harry was drafted in June 1943 he was apparently a salesman.  We don't know where he was previously but he was transferred from the replacement depot to B Company 116th Infantry on 10 Oct 1944.  Harry was reported as missing in action on 6 Dec 1944. He was apparently wounded and captured on the 3rd.  He was recorded in the morning report as having died on the 9th of December.  For some reason, even though the internment record gives the date of death as 9 Dec 1944 it was mistakenly given as 1 Dec 1944 on the gravestone.

PFC Eiduson was returned to the U.S. in 1949 and is buried in Woodlawn National Cemetery in Elmira, New York.

Both of Harry's brothers also served in WWII.
Posted by Hobie at 6:28 PM

Email ThisBlogThis!Share to TwitterShare to FacebookShare to Pinterest
Labels: B Company, WoodlawnNC