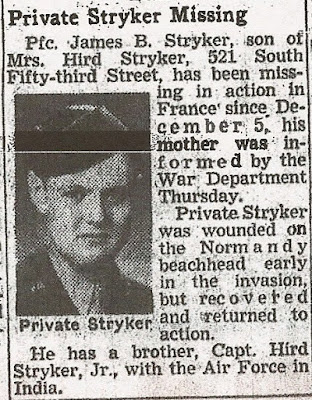 PFC James Baume Stryker was born 11 Dec 1918 in Evanston, Illinois to Hird Franklin and Ruth Estey (Baume) Stryker.  One of 5 children, James attended Omaha High School and was in the ROTC.

James went into the service almost directly out of high school after spending only 1-year at Yale University, overseas with the 29th Division and was assigned to K Company 116th Infantry.  He participated in the D-Day landing, was promoted to PFC on 1 Jul 1944.  He was wounded and went to hospital on 11 Jul 1944 (near St. Lo).  On 28 Oct 1944 he was returned to the unit from the replacement depot.  While he was missing in action for a time it was later determined that he had been killed in a German minefield on 5 Dec 1944.

His brother, mentioned in the article, was an actor who enlisted in Washington, D.C. giving his home state as Indiana.

PFC Stryker is buried in Netherlands American Cemetery.
Posted by Hobie at 12:09 PM