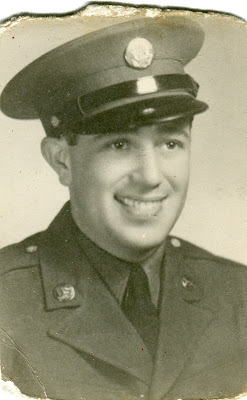 PFC Peter W. Perrone was born 10 Jul 1920 in Lodi, New Jersey. He was the youngest of 5 children born to Ciro and Antonina (LaBarba) Perrone. Both parents had immigrated from Sicily. His father worked hard to support the family who lived on Summer Street in Lodi for many years. Oldest brother Benjamin died in 1932 and Ciro died in 1939 at 54-years old. In 1940 the family was living in a house they owned at 21 Summer Street which was valued at $3000. Peter's older sister Rose together with her husband and son also lived with the family With Ciro gone, everyone in the family went to work but none of them worked for all of 1939. However, their combined reported income for 1939 was $2800 to support the family of 7. Peter did his part although he never advanced his education beyond grammar (elementary) school, working in a silk mill with other family members for 20 weeks of 1939 and earning $350.

Peter was drafted in January 1943. After his basic infantry training he was sent to the European theater. PFC Perrone was transferred from the replacement depot to B Company 116th Infantry on 27 Oct 1944. PFC Perrone fought with B Company until killed in action on 4 Dec 1944.

PFC Perrone was repatriated in 1948 and re-interred in the Saint Nicholas Cemetery in Lodi, New Jersey.