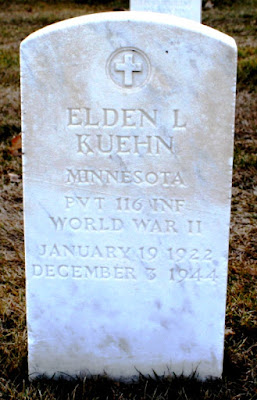 PVT Elden Lawrence Kuehn was born 19 Jan 1922 in Saint Paul, Minnesota to Herman August and Esther Lucy (Wolff) Kuehn. His father worked as a finisher in a furniture factory and as a laborer for the Works Progress Administration.

PFC Kuehn was repatriated in 1949 and is buried in the Fort Snelling National Cemetery in Minneapolis, Minnesota.

His brother, Robert Gene Kuehn, served as an Army PFC during the war.
Posted by Hobie at 6:54 PM