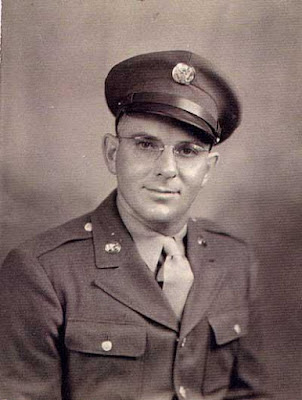 PVT Melvin Donald Butzner (b. 9 Nov 1913 - d. 4 Dec 1944) born in Plymouth County, Iowa to John R (a native Virginian) and Lucy Bell (Swearingen) Butzner and was married to Helen Mathilda Smith.
Melvin and Helen had one son, Melvin, who died shortly after he was born in 1937. Melvin had a brother, John, who also served in the military in WWII and Korea.
Melvin enlisted 6 Oct 1943 and reported for duty to A Company, 116th Infantry on 13 Jun 1944. He was apparently wounded on 3 Jul and returned from the hospital on 14 Nov. Initially assigned to B Company, he must have managed to convince somebody to reassign him to A Company on 20 Nov. Initially declared MIA on 7 Dec his date of death was apparently found to be 4 Dec.. His body was not repatriated until 1949 or 1950.  He is now buried in Mount Hope Cemetery in St. James, Minnesota.

His grandfather, John Hunter Butzner served in the Fredericksburg Light Artillery in the Civil War and was mustered out at Appomattox Court House.

Email ThisBlogThis!Share to TwitterShare to FacebookShare to Pinterest
Labels: A Company, B Company