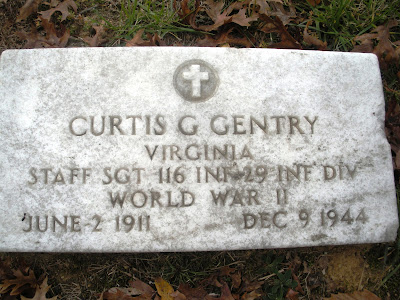 SSG Curtis Glenwood Gentry was born 2 Jun 1911 in Fluvanna County, Virginia to Harry Dickerson and Annie Estelle (Melton) Gentry. the family farmed.  On 22 Dec 1938, Curtis married Willie Eddie Watts and they had a son a year and a day later.

Curtis was a PVT in the Charlottesville, Virginia infantry unit when K Company 116th Infantry was federalized in February 1941.  He went through all the training the unit experienced at Fort Meade and Camp Blanding and shipped out with them to England in September 1942.  He then went through all the pre-invasion training the unit had for the amphibious landing that was to happen on 6 Jun 1944 on Omaha Beach.  He survived all that and was wounded on 22 Jun 1944.  Evacuated to the hospital he was not returned to the unit until 16 Nov 1944.  SSG Gentry was wounded again on 8 Dec 1944 and again evacuated to hospital.  He died of his wounds there on 9 Dec 1944.

SSG Gentry was repatriated in 1949 and is buried in the Bethel Baptist Church Cemetery in Palmyra, Virginia.  Willie did not remarry until 1961, she passed away in 1996.  So far as we know his son is still living.
Posted by Hobie at 10:19 AM