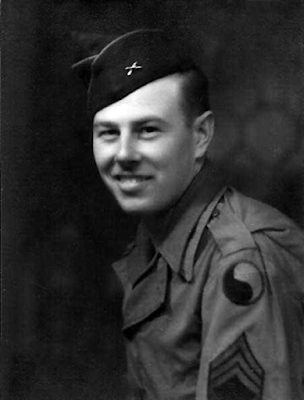 SSG James Eugene Schulz was born 6 Feb 1922 in Dwight, Illinois. He was the eldest of 8 children of William Herman and Marie Theresa (Schopp) Schulz. His father farmed in Livingston County, Illinois. James only completed 1-year of high school and went to work for another farmer.

James voluntarily enlisted in August 1942. After his basic military training he was sent to England and assigned to K Company 116th Infantry. He trained with that unit in England for the planned amphibious landing that was to be part of the liberation of occupied France. PFC Schulz took part in the landings and fought with the unit until wounded on 19 Jul 1944 by which time he had been promoted to SSG and was serving as a squad leader. Evacuated to hospital SSG Schulz spent almost 4 months recovering from his wound(s). He was returned to his unit via the replacement depot on 13 Nov 1944. He then fought with K Company through Baesweiler and Setterich. SSG Schulz was killed in action near Koslar, Germany on 5 Dec 1944.