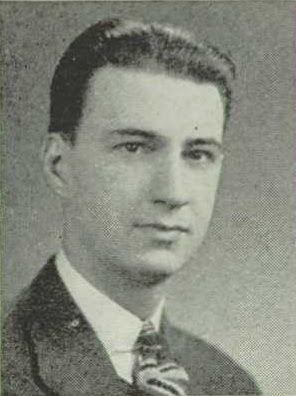 SSG Samuel Marinaro - b. 12 Oct 1923 - d. 3 Dec 1944. Son of Emmanuel and Margaret E (Reisch) Marinaro, Samuel was born in Pittsburgh, PA (his father was from Sicily). He graduated from Peabody High School and enlisted 15 Feb 1943. On 14 Aug 1944 he was assigned to F Company 116th Infantry as a Private and wounded 1 Sep as the unit moved to capture Brest and promoted to Sergeant. He was wounded again 15 Oct 1944 and promoted to Staff Sergeant the next day. He was wounded again 26 Nov 1944 and again returned to duty and was still assigned to F Company when he died. SSG Marinaro was survived by his parents and sister Carmela Emma Marinaro. This photo was taken from his high school yearbook. SSG Marinaro is buried in the Netherlands American Cemetery.
Posted by Hobie at 6:44 AM