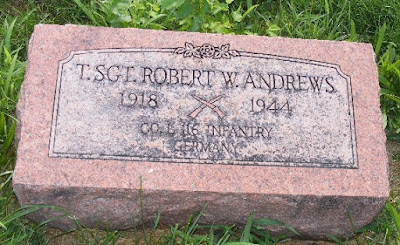 TSGT Robert W. Andrews was born in February 1918 in Illinois to Henry William and Lydia Maria Sophia (Ellinghausen) Andrews.  His father worked as a carpenter and so was Robert in 1940.  The family was thus able to have an income of over $3300 in 1939.

Robert was drafted in June 1941.  We do not know to what other units he had been assigned but he was a SGT when transferred from the replacement depot to L Company 116th Infantry on 3 Sep 1944.  The morning report notes his promotion to SSG on 1 Nov 1944 and he was a TSGT when killed in action on 3 Dec 1944.  I should note that it appears that it is believed he was killed by a sniper.  We can not confirm that.

TSGT Andrews is buried in Trivoli Cemetery in Trivoli, Illinois.
Posted by Hobie at 7:50 AM