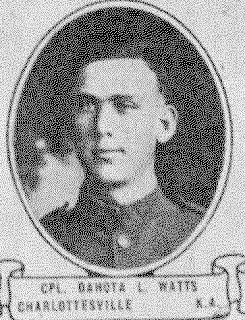 CPL Dakota L. Watts was born in July 1898 in Charlottesville, Virginia, the 6th of 7 children born to William E. and Virginia Eliza (Dickerson or Dickinson) Watts.  His father farmed near Towner, North Dakota but died before 1910 and the family returned to Virginia where they farmed in the  Samuel Miller district of Albemarle County.

After entering the Army, Dakota was assigned to H Company 116th Infantry. He trained with the unit at Camp McClellan and Anniston, Alabama and was already a CPL when he shipped out with the unit for France aboard the USS Finland.  CPL Watts was killed in action on 11 Oct 1918.

CPL Watts was buried in the Meuse-Argonne American Cemetery.