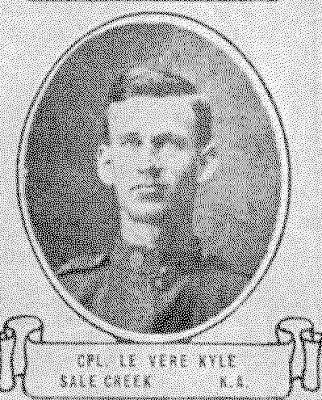 CPL Levere Kyle was born in May 1889 in Carroll County, Virginia. About 1908 he moved to Colbert County, Alabama farming near Tuscumbia.  He was using the alias of Jack D. Vaughn. He married Miss Katie L. McCluskey on 25 Dec 1911.  The couple would have 1 child, a daughter named Opal in 1913. The family moved to the vicinity of Waterloo, Alabama in 1914 and after a short time he moved back to Virginia.

Levere enlisted in L Company 2nd Virginia Infantry on 20 Jun 1916.  He went with the unit to the southeast for Mexican Border service. He was with the unit when it was again federalized for service in France and trained with them at Camp McClellan, Alabama.  The unit and CPL Kyle left on 15 Jun 1918 for France aboard the USS Finland.  They arrived at Saint Nazaire, France on 28 Jun 1918 and were sent to training in trench warfare.  The regiment and 29th Division were then put into a "quiet" sector on the front lines before being used in a major effort which began on 8 Oct 1918.  CPL Kyle was struck by a shell fragment (aka "shrapnel") which killed him.

In 1922 he was repatriated and re-interred in Glendale Cemetery in Tuscumbia, Alabama.