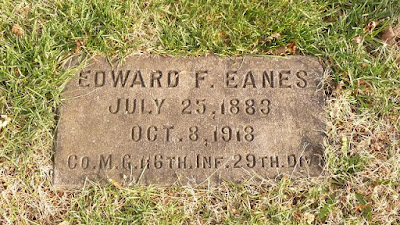 Edward entered the service about April or May 1918.  He was enlisted in or was assigned to Machine Gun Company 2nd Virginia Infantry, went to Camp McClellan, Alabama with the unit and was among the men who were assigned to Machine Gun Company 116th Infantry when the new organization was activated.  Edward sailed with the unit aboard the USS Finland on 15 Jun 1918 arriving in the port of Saint Nazaire, France on 28 Jun 1918. He went through the divisional trench warfare training and experienced combat when the 29th Division was assigned to a "quiet" sector on the front lines.  PVT Eanes was killed in action on the first day of a major offensive in the vicinity of Verdun on 8 Oct 1918.

PVT Eanes was repatriated and re-interred in Evergreen Burial Park in Roanoke, Virginia.

Edward was 1st cousin to PVT Arthur Lee Eanes of the same company. Both were descended from Revolutionary War veterans.
Posted by Hobie at 6:37 PM