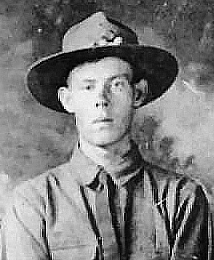 PVT Frank Raymond Beasley was born 17 Aug 1898 in Nelson County, Virginia the first of 8 children born to George Wesley and Mattie Mildred (Clements) Beasley.  We know that Frank's father worked as a day laborer and as a grader in a saw mill.

On 4 Aug 1917, Frank went to Charlottesville, Virginia and enlisted in the 2nd Virginia Infantry, a National Guard unit, for "the emergency" which was to result in service on the Mexican border.  After the unit returned it was soon recalled for duty in France.  Sent to Camp McClellan, Alabama for training and then aboard the USS Finland to France, Frank got to experience it all.  PVT Beasley was killed in action on 11 Oct 1918.

PVT Beasley was repatriated and re-interred in the George W. Beasley Cemetery in Schuyler, Virginia.
Posted by Hobie at 4:15 PM