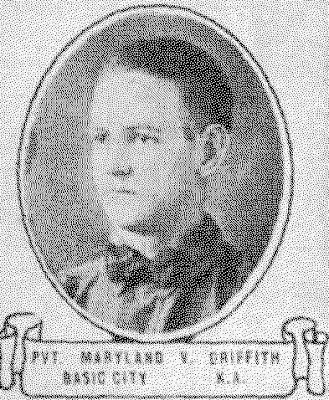 PVT Maryland Virginia Griffith was born 10 Aug 1897 in Augusta County, Virginia.  He was the youngest of 6 children born to Dr. Robert Sumter and Annie Julia (Webb) Griffith.  He was given the name "Maryland" to honor where his parents had been born and "Virginia" to honor the state where his parents had chosen to make a new life. Of Annie's children, only he and his older brother, William Louis Griffith, lived to adulthood. Both parents had been born in Maryland. His father was a medical doctor who had practiced in Springfield, West Virginia before moving to Basic City (now Waynesboro), Virginia. Maryland's mother died in 1913 and his father re-married and had  2 more children. Maryland was a student at Randolph Macon College in 1917.

Maryland volunteered for service with the 1st Virginia Infantry for Mexican Border duty in 1916. He and the unit were again called to duty for the war in Europe.  After reorganization at Camp McClellan, Alabama PVT Griffith would find him assigned to Sanitary Detachment 116th Infantry which was commanded by CPT (Dr.) White, his father's friend. He sailed for France with his unit aboard the USS Finland.  The ship departed Hoboken, New Jersey on 15 Jun 1918 and arrived at the port of Saint Nazaire, France on 28 Jun 1918. After training in trench warfare and a period of acclimatization in a "quiet" sector on the front, the 116th along with its division, the 29th, was part of a major offensive beginning on 8 Oct 1918.  The next day Maryland and others from his unit were at a spring getting water for the regiment. The Germans had targeted the water source and shelled it. PVT Griffith was seriously wounded and evacuated to a hospital where he died on 10 Oct 1918.

Dr. White was instrumental in bringing PVT Griffith home where he was re-interred in Riverview Cemetery in Waynesboro, Virginia.

Our thanks to Nancy Sorrels for her previous research and article on Maryland in the 18 Feb 2012 issue of The News Leader.

Email ThisBlogThis!Share to TwitterShare to FacebookShare to Pinterest
Labels: SanDet