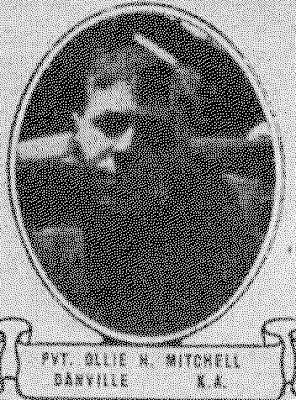 PVT Ollie H. Mitchell was born in July 1899 in Danville, Virginia.  He was the first born of 8 children of Augustus Lafayette and Elizabeth Albert (Adkins) Mitchell. His father was a weaver in one of the city's textile mills.

When Ollie entered the Army he was assigned to C Company 116th Infantry. PVT Mitchell sailed to France with his unit aboard the USS Finland which departed Hoboken, New Jersey on 15 Jun 1918. After debarking at the port of Saint Nazaire, France on 28 Jun 1918 the unit underwent training in trench warfare before being assigned to a "quiet" sector in the front lines. A major offensive began on 8 Oct 1918 in the vicinity of Verdun of which the 116th was a part. PVT Mitchell was killed in action on that day.

PVT Mitchell was certainly repatriated and we believe he was re-interred near Danville.
Posted by Hobie at 3:45 PM