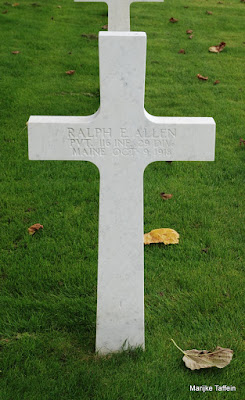 PVT Ralph Ellsworth Allen was born 8 Feb 1890 in South Berwick, Maine to Orin Philip and Elsie Jane (Boston) Allen. The family farmed. His father and mother died in 1908 and 1910 respectively and Ralph lived with his older brother Herbert.

He is buried in the Meuse-Argonne American Cemetery.  His father, Orin Philip Allen served as a PVT in the 14th Regiment of Maine Volunteer Infantry (1862-1865) during the Civil War .
Posted by Hobie at 7:00 PM