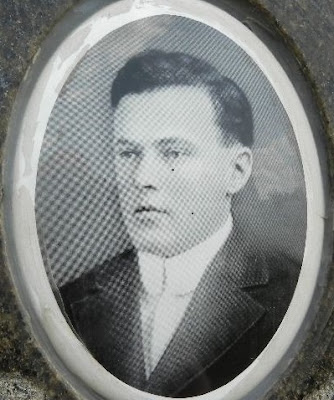 PVT Wenzel Walecka was born 14 Nov 1893 in Montpelier, Wisconsin the 3rd of 6 children of Wenzel and Antonia (Tichy) Walecka. His parents were both born in Bohemia. The family farmed.

After Wenzel entered the Army he was assigned to H Company 116th Infantry. He trained with the unit and sailed aboard the USS Finland with the unit to France. PVT Walecka was killed in action on 11 Oct 1918.


Entire Community Turns Out to Honor Hero Who Died in France  The remains of Private Wenzel M. Walecka, one of the sixteen young men of this county that made the supreme sacrifice, arrived here Friday morning under military escort of Private Wayne Holdridge of Camp Grant and were immediately taken to the Walecka home in the town of Montpelier.  Flags on the court house and various places about the city were at half mast out of respect to the memory of the deceased hero on the arrival of the remains here.  A squad of Kewaunee Post No. 29, American Legion, were at the depot to receive the remains and honor their fallen comrade.  Wenzel M. Walecka was the son of Mr. and Mrs. Wenzel Walecka of the town of Montpelier, and was born there on Nov. 14, 1893.  He attended the district school at Ellisville, and after graduation he chose to follow the cheesemaking trade and became an apprentice in a factory near his home.  He later took a course in the Dairy School at Madison and upon his return accepted a position as cheesmaker at Ryan, which occupation he was engaged in when the call to the colors came in March, 1918.  He entrained at Kewaunee on March. 29th of that year, for Camp Custer, Mich., later being transferred to Camp Gordon, Ga., then to Camp McClellan, Alabama.  Shortly following, he was sent overseas, and after a brief training in the rear he was sent to the front.  His last letter home was written on Sept. 10th and was received on the tenth of the following month the day before he was killed in action.  Private Walecka was a member of Co. H. 116th Inf.  Because of his trustworthiness, he was assigned to the important and hazardous duty of a platoon runner, and it was while engaged in this work that he was killed on Oct. 11th, at 4:00 o'clock P.M., while in a shell hole with six other men when he was hit somewhere about the waist by a direct hit of a high explosive shell.  The battle in which he was killed, took place southeast of the Molleville farm in the Conseuvoge wood, and his body was buried the next day close to the spot  where he fell, by a burial detail under Chaplain Thomas Bulla who was later also killed in action.  His captain, in a letter to Private Walecka's parents, spoke of him in the highest terms, praising his soldierly courage and strict performance of duty no matter how dangerous.  He was always first to respond when volunteers were called upon and, in the words of his superior, he was every inch a soldier.  The funeral Monday morning, was one of the largest seen in this vicinity for years, more than seventy cars followed the remains from the late home to St. John's Catholic church at Krok, where Rev. Koutnik sang a requiem high mass at ten o'clock.  The church was far too small to seat the many relatives, friends and ex-service men that came to pay their last respects to the deceased.  Kewaunee Post, American Legion, had charge of the military part of the funeral and acted as guard of honor.  About thirty ex-service men in uniform were present at the last rites.  Six ex-service men in uniform and wearing helmets were the pall bearers.  After the religious services at the grave a salute was fired and taps sounded over the last resting place of the hero who gave his all for his country's sake.


PVT Walecka was repatriated and re-interred in Saint John Nepomucene Cemetery in Krok, Wisconsin.
Posted by Hobie at 4:06 AM