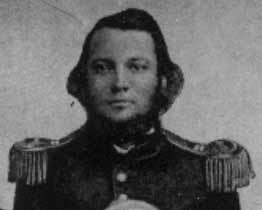 William Smith Hanger Baylor was born in Augusta County, deep in the Valley of Virginia, on April 7, 1831, the only son of Jacob and Eveline Hanger. His father was an ex-judge who owned a prospering farm near Staunton. Even in his early youth Baylor displayed an unusually pleasing personality. He received his local schooling at the Staunton Academy and, in 1850, graduated from Washington College in Lexington. He showed outstanding skill in debate. Baylor earned his law degree from the University of Virginia in 1853 and returned home to hang out his shingle. In 1857 he was elected commonwealth's attorney for Staunton and held the post through successive elections until his death. When a local militia company was organized in the late 1850’s, Baylor also was elected captain of the West Augusta Guards, and quickly elevated it to one of the finest militia companies in the state. This unit was one of the first called out to repel John Brown’s raid in October, 1859. But Baylor was not there to lead it. He had gone to New York on his honeymoon, where he was stricken with typhoid fever. However, he was present with the unit at the execution of John Brown.

When several volunteer companies from Augusta County were organized at the outset of the War in the spring of 1861, Baylor was chosen their colonel. In April the units were ordered to Harpers Ferry and mustered into Confederate service as the 5th Infantry Regiment, Virginia Volunteers; in the reorganization Baylor was appointed major. Thomas J. Jackson wrote at least one letter to Richmond in which he upheld Baylor as his most dependable and deserving subordinate during the critical weeks of organization at Harpers Ferry.

Baylor served with distinction in a skirmish at Falling Waters and again, three weeks later, in a sprawling battle on the plains of Manassas. With the reorganization of the Stonewall Brigade in mid-April, 1862, Baylor was named to the command of his old Fifth Regiment. From that moment on, in a unit distinguished for its valor, he set an example. The young colonel from Staunton fought with distinction in Jackson's Valley Campaign, once having his horse shot from under him while leading a charge at Winchester, so he led the final assault on foot. During the Seven Days he was cited several times for conspicuous bravery. After the battle of Cedar Run in August 1862, Baylor was given command of the Stonewall Brigade. But because his undaunted courage and complete disregard of personal safety made him an easy target in battle, Baylor’s first campaign at the head of the Stonewall Brigade was his last. Barely ten days after assuming command – even before his promotion to brigadier could be confirmed – he was killed in the closing moments of Second Manassas, carrying the flag of the 33rd Virginia. Baylor's body was tenderly borne from the battlefield and returned to Augusta County where he was buried in the Hebron Presbyterian churchyard.
Posted by Hobie at 10:48 AM No comments:

Email ThisBlogThis!Share to TwitterShare to FacebookShare to Pinterest
Labels: 5thVA

COL Thomas Spencer Dallas Sr. was born 12 Dec 1913 in Rockingham County, North Carolina, probably Leaksville. He was the 2nd of 5 children born to Philip Kyle and Della Ruth (Spencer) Dallas. His father worked as a clerk. The family moved to Martinsville, Virginia before 1930 where Philip worked as an insurance agent and later operated a grocery store. By 1940 he was working as a supply clerk in an auto shop.

It was just a month later that Thomas married Fannie Mildred Graham of Martinsville. The couple likely didn't have much time together as the 116th was sent to Camp Blanding for further training before departing for England aboard the Queen Mary in September 1942.  His first son would be born 12 Nov 1942. While in England, the 116th trained for the amphibious assault that would be a major element of the invasion of occupied northern France. The now MAJ Dallas came ashore in the 1st wave as Battalion Executive Officer at Omaha Beach, surviving the landing and helping to lead his battalion inland. For these efforts he would receive the Silver Star. On 29 Jun 1944 MAJ Dallas assumed command of 1st Battalion 116th Infantry. Thomas was wounded on 5 Aug 1944 and evacuated to hospital. He was not returned to the unit, coming by way of the replacement depot, on 7 Sep 1944.  Only 7 days later he would lead the battalion in an action for which he is much remembered, the capture of Fort Montbarey.


Although he had what was described as a round "cherubic" face, MAJ Dallas had a reputation for a fierce temperament and was thought to be a solid combat leader. MAJ Dallas was supported by B Squadron, 141st Regiment, Royal Armored Corps; a platoon of the 644th Tank Destroyer Battalion (with 4 M-10s); part of B Company, 121st Combat Engineer Battalion; B Company 86th Chemical Mortar Battalion; and some 105mm cannon from Cannon Company 116th Infantry. A detailed story would be too long for this account but Dallas had the combat engineers clear several paths through the minefield surrounding the fort which task had to be accomplished in the dark. C Company would conduct an all-day fight to take control of the outer defenses on the west side of the fort. The 141st's Crocodile tanks (flamethrowers) went up against the fort by firing on the embrasures and they were supported by conventional tanks. The Crocodiles made it through and as B Company moved forward they were able to capture almost 80 of the enemy. The Americans needed to enter the fort and brought up the Crocodiles, tanks and even a 105mm cannon to fire on the gate. White phosphorus rounds fired through the gate into the courtyard apparently made a wreck of that part of the fort but there was still no entry to the courtyard. There was another passage and again, tank and cannon fire was used to open an access hole. The 121st Engineers managed to move nearly 1-ton of TNT into the hole and under a critical point of the north wall. It was now the 16 Sep 1944. After the recovery of the body of 2LT Durwood Settles (who MAJ Dallas knew from H Company pre-war, the charge was set-off at about 1700 hours. The explosion had the effect of collapsing the north wall so much that ladders weren't necessary for the soldiers who rushed in to capture the stunned German soldiers.

After demobilization, LTC Dallas helped to reactivate the National Guard. He returned to active duty in June 1951. He would take his family with him for a tour of duty in Japan in 1955. By 1962 COL Dallas was senior Army advisor to the Alaska National Guard. On 25 Apr 1962 the helicopter in which he was riding crashed and he and 7 other passengers and crew were killed.

COL Dallas was buried with his wife in Arlington National Cemetery in Arlington, Virginia.

Note: this memorial was published on the 50th anniversary of COL Dallas passing due to the limitations imposed by Blogger.