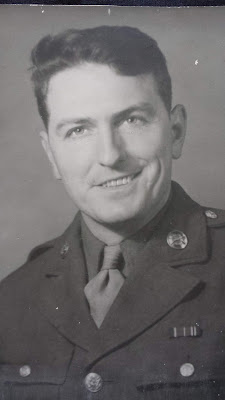 PVT Alvin Herschel Norman was born 26 Aug 1920 in Amsterdam, Missouri. He was the 4th of 8 children and oldest of the 2 boys born to James Fiske and Alma Mattie Doll (Finn) Norman. The family farmed for at least 20-years in Bates County, Missouri.

After being drafted and attending his basic training, Alvin was sent to England and assigned to E Company 116th Infantry. He trained for that unit for the amphibious landing that took place on 6 Jun 1944 and in which he took part. On 11 Jun 1944 he was transferred to A Company 116th Infantry when the regiment cross-leveled to replace the losses A Company had suffered on D-Day. PVT Norman fought with A Company until killed in action on 1 Jul 1944.

Email ThisBlogThis!Share to TwitterShare to FacebookShare to Pinterest
Labels: A Company, NormandyAmericanCemetery