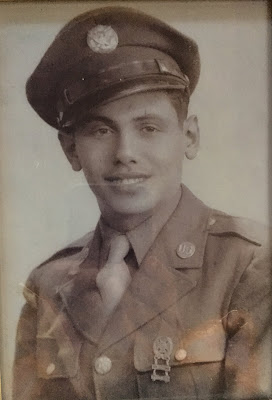 PVT Benjamin (Benno) Hoch was born 8 Jun 1925 in Frankford On Main, Hassen-Nassau, Germany a son of Nissen and Malia Hoch.  The Jewish family had escaped from Germany by 1940. Nissen came to the U.S. in 1938, the 4 children in 1939 via Rotterdam and Malia via Sweden in 1940.  His father had been born in Dobiecko, Poland and his mother in Czudec, Poland.

When drafted in September 1943, Benjamin was an apprentice in a construction trade and may have been partial support for his family.  After his training he was sent overseas to Europe and on 22 Jun 1944 was transferred from the 80th replacement depot to D Company 116th Infantry. PVT Hoch was wounded on 1 Jul 1944 somewhere in the vicinity of Couvains, evacuated to hospital and died of his wound(s) later that day.

PVT Hoch is buried in Wellwood Cemetery in Farmingdale, New York.
Posted by Hobie at 7:50 AM