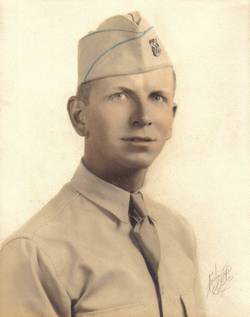 Technical SGT William Darden "Bill" Rowell was born 26 Jul 1918 in Greensville County, Virginia to Thomas Joseph and Lucy Gary (Turner) Rowell.  William was federalized 3 Feb 1941 with his National Guard unit and served with M Company until the end of the war.

During their long time in England the 116th fielded a baseball team, the Yankees, on which William played.  He has a short biography at Baseball in Wartime.

TSGT Rowell died 1 Jul 2004 in Emporia Virginia and is buried in Greensville Memorial Cemetery in Emporia.
Posted by Hobie at 8:26 AM