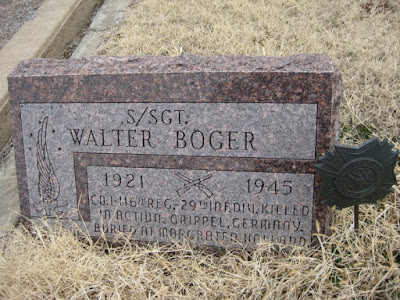 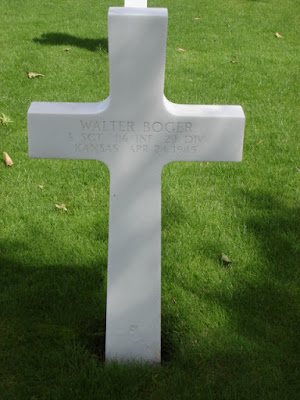 SSG Walter Boger was born in 1921 to Isaac and Sophia (Radke) Boger of Homestead, Kansas.  Isaac was a farmer who died in 1926.  The youngest of Isaac and Sophia's 5 children, by 1940 Walter was supporting his mother as a clerk in a grocery.

While we don't know at this time when Walter entered the service it appears that he was assigned to I Company 116th Infantry prior to the D-Day landings.  On 16 Oct 1944 he was promoted to SSG. From 18 to 27 Dec 1944 he was at the 29th Division Training Center.  Returned to I Company, he was killed in action 24 Apr 1945 in the vicinity of Grippel, Germany.

SSG Boger is buried the Netherlands American Cemetery.
Posted by Hobie at 5:06 PM

Email ThisBlogThis!Share to TwitterShare to FacebookShare to Pinterest
Labels: I Company, NetherlandsAmericanCemetery