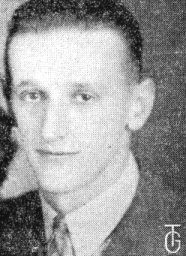 PVT Herschel Paul Smith was born 25 Apr 1924 in Jeromesville, Ohio. He was the youngest of Walter Clarence and Ethel May (Marietta) Smith's 6 children. Walter supported his family by farming on a rented farm near Vermillion, Ohio but by 1940 had to move to Washington, Ohio where he rented a house for $8 a month and worked as farm labor for other farmers earning $430 in 1939. Herschel attended Loudonville High School and then worked at farming with his father. Herschel married Ruby Louise Sparr in March 1944.

10-days after his wedding, Herschel was drafted in April 1944. He attended his basic military training in Camp Robinson, Arkansas which is just outside North Little Rock. His wife was able to be there for the 17-weeks of his training. PVT Smith was then sent to the European theater and transferred from the 86th Replacement Battalion to B Company 116th Infantry on 25 Oct 1944 where he was to serve as a rifleman. This was in the rehabilitation area in the vicinity of Finkenrath, Germany. The unit would remain there until 16 Nov 1944 when the regiment began the attack on German forces in Baesweiler, Germany. PVT Smith was killed in action in Baesweiler on 17 Nov 1944.

PVT Smith was repatriated in 1948 and re-interred in the Loudonville Cemetery in Loudonville, Ohio.

Brothers Walter Clarence Smith Jr and Kenneth Eugene Smith both served. Kenneth would die on 24 Oct 1950 as a result of his wound(s) received in Italy.
Posted by Hobie at 10:53 AM