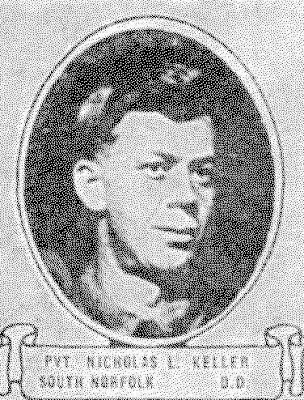 PVT Nicholas L. Keller was born 10 Feb 1887 in New Haven, Connecticut, the first of 5 children born to Nicholas J. and Nettie Elizabeth (Jacobs) Keller.  His father worked as a driver for a construction company.  In 1910, the younger Nicholas was working as a crane operator.  At some point in time Nicholas and his brothers would move to Norfolk, Virginia to work in the shipyards there. When drafted, Nicholas was working as a painter for Arthur McCloud in South Norfolk.

After entering the Army, Nicholas was assigned to I Company 116th Infantry and trained with the unit at Camp McClellan, Alabama.  On 15 Jun 1918, he and the rest of the regiment embarked on the USS Finland at Hoboken, New Jersey for the trip to France.  After the regiment received training in early July the unit moved into the line. PVT Keller received a serious gun shot wound in action near the Verdun Sector on 15 Sep 1918 and developed pneumonia on 16 Dec 1918 and died as a result on 25 Dec 1918.

Brother Theodore Roosevelt Keller served as a PVT in  E Company 31st Infantry serving in the American Expeditionary Force Siberia. PVT Theodore Keller is buried in the Hampton National Cemetery.
Posted by Hobie at 4:46 AM

Email ThisBlogThis!Share to TwitterShare to FacebookShare to Pinterest
Labels: I Company, Oise-AisneAmericanCemetery