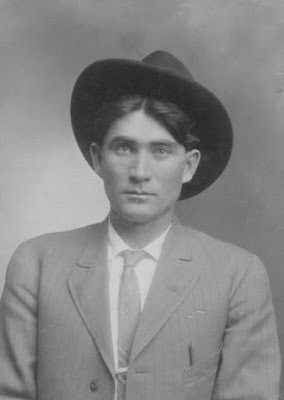 Lee's mention of a "rupture" on his draft card did not prevent his induction and he was assigned to I Company 116th Infantry.  He trained with M Company 133rd Infantry and was transported to France with that unit aboard the Achimedes.  At some point in time Lee was re-assigned to I Company 116th Infantry.  He finished the war and served until he became ill in March 1919.  PVT Taylor died of meningitis on 16 (or 15) Mar 1919.

The following is a letter to the family of PVT Taylor's death:

You have probably received the War Department's cable notifying you of the sad death of your brother, Lee R. Taylor, who was a member of I Company, 116th Infantry. He was taken sick at Parnot, Haute Marne, and carried to the hospital at Bourbonne, near here, on March 10th. He received the best of attention from skilled doctors and nurses but in spite of all they could do, he passed away on the evening of the 15th. The diagnosis was meningitis.

We feel the loss very keenly, and sympathize with you in your sorrow. Lee's comrades say that he was a "fine fellow," and I know that you will be proud to know that his service record is marked "Excellent Character," the highest grade. His close friend was Robert Tibliletti, from Victoria, TX. He is a member of I Company, and will probably write to you.

I had the sad duty of burying your brother yesterday. A squad from his company formed an escort of honor, and marched to the American cemetery at Bourbonne with his body. The funeral was a simple and impressive ceremony. After the few words of scripture and a prayer, three volleys were fired over the grave, which was covered with "Old Glory," and a bugler sounded "Taps." Private Taylor made the supreme sacrifice for his country, and you must always be proud, as we are, of his fine and soldierly spirit.

PVT Taylor was repatriated in 1921 and re-interred in San Antonio National Cemetery in San Antonio, Texas.
Posted by Hobie at 6:26 AM