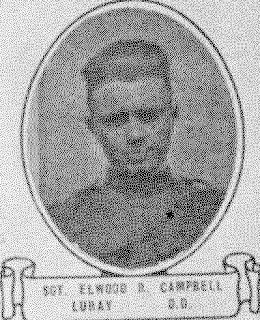 SSG Elwood Romas Campbell was born 16 May 1895 in Page County, Virginia.  Elwood was the 2nd of 9 children born to Romas and Susie Elizabeth (Moyer) Campbell. His father supported the family as a day laborer and farmer. Elwood was working as a chauffeur in 1916.

Elwood enlisted as a PVT in D Company 2nd Virginia Infantry on 26 Jun 1916. He was with the unit through the Mexican Border duty and the recall for service in Europe.  He trained with the unit at Camp McClellan, Alabama. On 15 Jun 1918 Elwood and the unit sailed for France aboard the USS Finland.  They arrived in the French port of Saint Nazaire on 28 Jun 1918. The entire 29th Division then began training in trench warfare after which they were put on the front lines in a "quiet" sector.  The unit was then part of a big offensive or "push" in the vicinity of Verdun which began on 8 Oct 1918.  Elwood served as the stable sergeant, managing unit mules and related equipment. He survived all that but after the armistice was declared on 11 Nov 1918 he became ill on 7 May 1919 and died of bronchial pneumonia on 11 May 1919 the same day that the rest of the unit sailed for home.

SSG Campbell was repatriated in 1919 returning to the U.S. aboard the SS Matsonia.  He was interred in Green Hill Cemetery in Luray, Virginia.

Brother, Julian Richard Campbell, served with Elwood in the Machine Gun Company but was wounded and died of his wound(s) on 12 Oct 1918.
Posted by Hobie at 6:00 PM