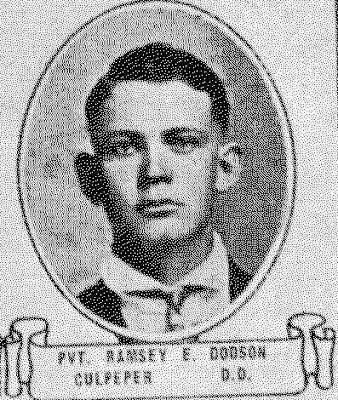 PFC Rumsey E. Dodson was born in 1894 in Madison County, Virginia the 4th of 8 children born to Joseph Henry and Elizabeth (Burke) Dodson. His father did farm work for other people and in 1910 Rumsey was doing the same.

Rumsey still gave his occupation as "farmer" when he enlisted in B Company 2nd Virginia Infantry, Virginia National Guard for Federal service on the Mexican border.  After enlisting 29 Mar 1917, PVT Dodson served on the Mexican border, returned to Virginia and was recalled for the World War.  He trained with the unit re-organized as I Company 116th Infantry at Camp McClellan, Alabama.  Rumsey then sailed for France with the unit, departing Hoboken, New Jersey aboard the USS Finland on 15 Jun 1918.  He trained with I Company and went into battle with it all through to the Armistice on 11 Nov 1918. Then, after all that, he became ill, possibly the pandemic flu that killed so many, and was so sick that he couldn't travel home to the U.S. with his unit in May 1919.  PFC Dodson died in France of disease on 13 Jun 1919.

PFC Dodson was repatriated in 1922 and re-interred in the Culpeper National Cemetery in Culpeper, Virginia. While his stone indicates his rank is PVT, all other records correctly show his rank as PFC.
Posted by Hobie at 5:10 AM