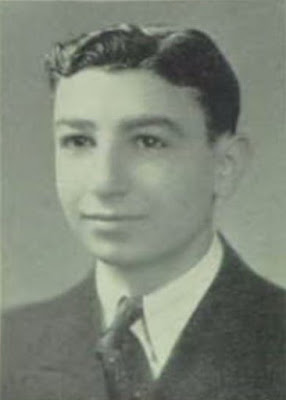 SGT Anthony John Paradiso was born 14 Apr 1922 in Tiffin, Ohio. He was the 3rd of 9 children and oldest son born to Salvatore and Maria Grazia (Cercelli) Paradiso. His father worked for what is now Webster Industries, Inc. in Tiffin. The family lived at the house he purchased at 380 Miami Street in Tiffin which was valued at $2000 in 1940. Anthony graduated from Calvert High School and worked as a clerk in a shoe store.

He was still in that line of work when he was drafted in September 1942. After his basic military training he would not be sent to Europe until June 1944. SGT Paradiso was assigned to L Company 116th Infantry on 7 Aug 1944 joining the unit near Vire, France. He was wounded on 1 Sep 1944 and evacuated to hospital. He returned to the unit via the replacement depot on 3 Jan 1945. On 5 Feb 1945 SGT Paradiso was sent to the 29th Division training center on temporary duty for 7 days. He was wounded in the face on 27 Feb 1945 but remained on duty. SGT Paradiso was killed in action on 1 Mar 1945.