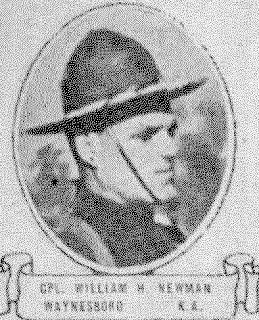 CPL William H Newman was born in January 1897 in Waynesboro, Virginia. He was the 5th of 7 children born to John William and Annette "Nettie" Catherine (Gardner) Newman. His father supported the family as a laborer.

After entering the service, William was ultimately assigned to A Company 116th Infantry.  He sailed with the unit to France aboard the USS Finland.  The ship departed Hoboken, New Jersey on 15 Jun 1918 and arrived at the port of Saint Nazaire, France on 28 June 1918. The unit underwent training in trench warfare before being put into the line in a "quiet" sector.  It was here that CPL Newman was killed in action on 24 Aug 1918.

CPL Newman is buried in the Meuse-Argonne American Cemetery.

Brother, Charlie Brown Newman, also served in the Army during the war.
Posted by Hobie at 5:04 AM