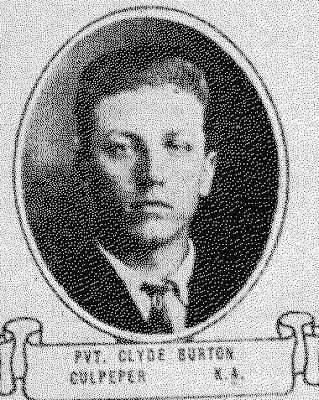 PVT Clyde Ramon Burton was born in 2 Feb 1895 in Culpeper, Virginia the youngest of 3 children born to Edward and Octavia (Sullivan) Burton.  His mother died 2 years after his birth and his father apparently died before Clyde turned 15.  It seems that Clyde was then passed on to others to raise as he is not with his father in 1917

Clyde gave his occupation as farmer in Leon, Virginia  on 5 Jul 1917 when he enlisted in B Company 2nd Virginia Volunteer Infantry for Mexican border duty. Recalled for duty in Europe, PVT Burton trained with the Regiment at Camp McClellan and Anniston, Alabama before boarding the USS Finland for the trip to France.  His sister was listed as next of kin on the ship's manifest. PVT Burton was killed in action on 31 Aug 1918.

PVT Burton found his final rest at the Meuse-Argonne American Cemetery.
Posted by Hobie at 11:10 AM

Email ThisBlogThis!Share to TwitterShare to FacebookShare to Pinterest
Labels: I Company, Meuse-ArgonneCemetery