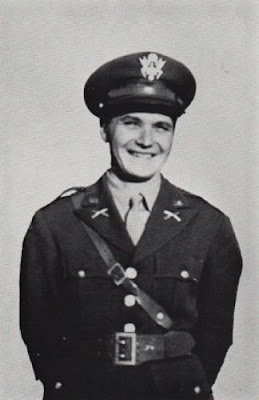 1LT Robert Castleman Shepard was born 2 Jan 1921 the 3rd of 5 children born to George Milson and Esther (Rutherford) Shepard of Saint Paul, Minnesota. His father was a civil engineer working primarily in building construction. Robert would attend Saint Mary's School in Faribault, Minnesota and participate in the cadet corps there graduating in 1939. The family lived at 1084 St. Clair Street in Saint Paul which was valued at $7500 in 1930. By 1940 they purchased the home at 873 Goodrich Avenue which was valued at $8500. Robert worked for Toltz, King and Day an architectural firm in Minnesota.

Robert was drafted in 1942 and after his basic military training was selected for officer candidate school. He completed that and was sent to England. 2LT Shepard was one of the plus-up officers for the landings and was assigned to Company H, 116th Infantry on 1 Jun 1944. He was killed in action in the vicinity of St. Lo on 12 Jul 1944.

Older brother, CPT William Milson Shepard, was KIA 15 Apr 1945 near Bologna, Italy while in service with 85th Regiment, 10th Infantry Division (Mountain). Brother George Rutherford Shepard served in the Navy.  Younger brother Richard Shepard served in the Army from 1946-1947. Great-grandfather, John Thomas Rutherford, was awarded the Congressional Medal of Honor while serving with L Troop 9th New York Cavalry. He was a descendant of Henry Ingalls who served in the American Revolution as a PVT, SGT and LT of New Hampshire militia.
Posted by Hobie at 5:27 AM