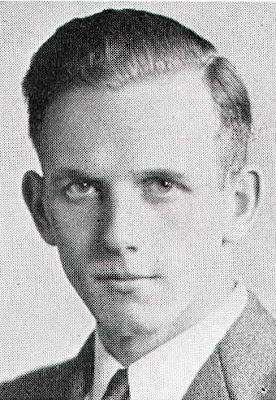 Edward enlisted in November 1940 and was a PFC in a Chicago, Illinois National Guard unit when it was federalized in March 1941.  After completing his initial training, perhaps including officer canidate school, Edward married Marie Helen Westphal on 19 Dec 1942 in Chicago.  Some time after that Edward was sent to Europe and transferred from the replacement depot on 23 Jun 1944 to G Company 116th Infantry where he was to serve as a platoon leader.  On 30 Jun 1944 2LT Karge was wounded and evacuated to hospital. He died of his wounds on 1 Jul 1944.

2LT Karge was repatriated in 1948 and now rests forever with his parents in Bethania Cemetery in Justice, Illinois. His younger brother, Frank William Karge, also served in the U.S. Army during the war.
Posted by Hobie at 1:38 PM