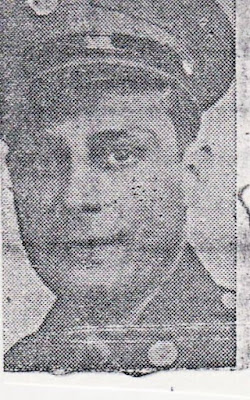 PFC Harvey Leroy Osman was born 17 Apr 1918 in Shamokin, Pennsylvania. He was the 4th of 9 children born to Harvey Henry and Sadie May (Carl) Osman. His father worked as a brakeman on the Pennsylvania Railroad. Harvey was able to complete all 4-years of high school and also went to work for the railroad.

Harvey was drafted in February 1942. In July 1942 he married Myrtle Isabelle Rubendall. It probably seemed like all too short a time before he was sent to England in September 1942, likely already having been assigned to C Company 116th Infantry. When in England he would have trained with the unit for the amphibious assault that was planned to be an element of the invasion of occupied France. He and Myrtle were blessed with a daughter on 5 Feb 1943. PFC Osman participated in the landings on D-Day, 6 Jun 1944 and fought with the unit until he was killed in action on 6 Jul 1944.

PFC Osman was repatriated and re-interred in Northumberland Memorial Park in Stonington, Pennsylvania.

Myrtle would re-marry 3 times. As we write this their daughter may still be alive.
Posted by Hobie at 7:32 PM