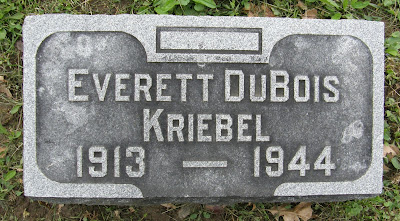 SSG Everett Dubois Kriebel was born in 1913 in  the second child of James Seipt and Ada E (Dubois) Kriebel.  His father worked in an electronics factory.  In 1939, Everett was office manager at Gospel Trumpett Company in Sacramento, California and his sister was working there as a clerk. In 1939 he married Ethel La Mae Zimmer

Everett was drafted in February 1943.  He was sent to England after his basic training and assigned to C Company 116th Infantry.  He trained with the unit for the amphibious landing that took place on 6 Jun 1944 and participate in that landing.  PFC Kriebel earned his first Bronze Star during that effort.  Everett was promoted to SSG on 21 Jun 1944. He continued to fight with C Company until he was killed in action on 6 Jul 1944.  It was during that action that he earned his second Bronze Star.

SSG Kriebel was repatriated and is buried in the Maplewood Cemetery in Anderson, Indiana. His wife Ethel married soon after the war.
Posted by Hobie at 8:22 PM