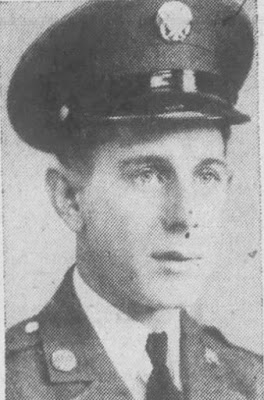 PFC John Henry Michaels III was born 27 Aug 1919 in Sunbury, Pennsylvania. He was the 3rd of 4 children born to John Henry and Sarah Dill (Young) Michaels. His father worked for Pennsylvania Railroad Company as a boiler maker and electric welder. The elder John reported a 1939 income of $1560 and the family paid $20 a month rent for their home at 1150 Susquehanna Avenue. Young John graduated from Sunbury High School in 1939. He had just entered the work force according to the 1940 census starting with the Pennsylvania Railroad.

John was drafted in May 1942. After his initial training at Fort George Meade, Maryland and Camp Blanding, Florida he was sent to England in September 1942 and assigned to K Company 116th Infantry. He trained with that unit for the amphibious landing that would be part of the invasion of occupied France. He participated in that landing in which A Company suffered heavy casualties and he was transferred to that A Company 116th Infantry on 11 Jun 1944 as part of the effort to bring that unit back up to strength. PFC Michaels was killed in action on 11 Jul 1944.

PFC Michaels was repatriated in January 1948 aboard the USAT Eric B. Gibson and re-interred in Pomfret Manor Cemetery in Sunbury, Pennsylvania.

Email ThisBlogThis!Share to TwitterShare to FacebookShare to Pinterest
Labels: A Company, K Company