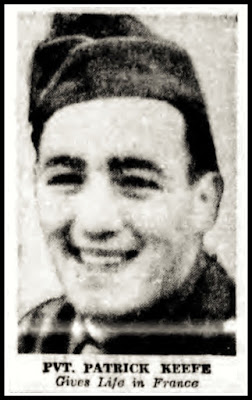 PFC Patrick J. Keefe was born 27 Jan 1924 in New Jersey the son of Patrick J. and Adelaide Lovett.  It appears that his father died in 1925 and his mother re-married in 1926.  His step-father farmed.

After entering the service Patrick was sent to England and assigned to C Company 116th Infantry.  He trained with this unit for the amphibious landing/assault in which he took part on D-Day, 6 Jun 1944.  As a rifleman, he fought with the unit until 3 Jul 1944 when he was wounded in action.  Evacuated to the rear he died of his wounds.

PFC Keefe was repatriated and now rests forever in the Long Island National Cemetery in East Farmingdale, New York.
Posted by Hobie at 6:12 AM