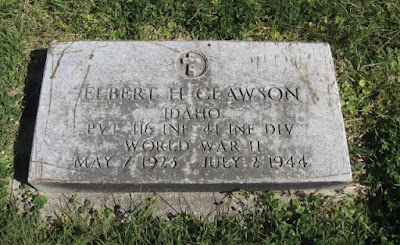 PVT Elbert Hainline Clawson was born 7 May 1923 in Peublo County, Colorado to Jesse Elbert and Caroline Ruth (Hainline) Clawson.  He was raised with his 10 siblings and half-siblings on the family farm in Gooding County, Idaho and later in Lemhi County, Idaho.

Elbert was still living in Lemhi County when he was drafted in June 1943.  He was likely assigned to 104th Medical Battalion on D-Day as on the 18th he was transferred from that unit to Medical Detachment 116th Infantry. He was then attached from there to Headquarters 1st Battalion 116th Infantry and then to C Company 116th Infantry on 21 Jun 1944.  The morning report shows PVT Clawson as being seriously wounded in action on 1 Jul 1944 and sent to hospital but is later corrected to indicate that he was killed in action on 2 Jul 1944.

PVT Clawson's body was returned to the U.S. in 1948 and he is buried in City Cemetery in Salmon, Idaho.
Posted by Hobie at 10:33 AM