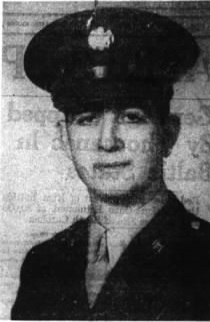 PVT John Saxon Payne was born 7 May 1925 in Greenwood, South Carolina. He was the eldest of the 4 children born to Joseph Robley and Alice Pearl (Norman). The youngest sibling, David, died in infancy in 1938. His father worked as an agent for an oil company earning a reported $1800 in 1939 and owning the family home at 411 Stanley Avenue in Greenwood which was valued at $8000 in 1940 but there is only a vacant lot there today. John, or "Saxie" as he was often called, graduated from high school in January 1943. He had lettered in three sports, managed the school store, played in the band and gotten high marks. After graduation he worked as a driver while living with his parents and sisters.

After being drafted in September 1944 he spent about 10 days at Fort Jackson, South Carolina. He was then transferred to Camp Wheeler, Georgia for 17 weeks of training. After that it was to Fort Meade, Maryland and embarkation to the European theater arriving in England on 18 Apr 1944. From there it was on to France and on 13 Jun 1944 he was transferred from the replacement depot to G Company 116th Infantry. Due to cross-leveling after the tremendous losses in the regiment on and immediately following D-Day, he was again transferred this time to F Company 116th Infantry. He fought with that unit until killed in action on 2 Jul 1944.

PVT Payne was repatriated and re-interred at Edgewood Cemetery in Greenwood, South Carolina where he will rest forever with family members.